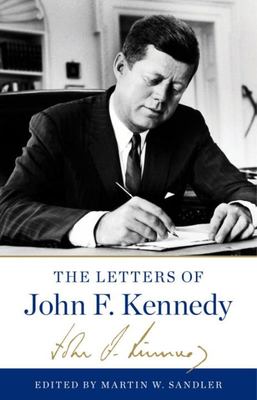 The Letters of John F. Kennedy

John Fitzgerald Kennedy led his nation for little more than a thousand days, yet his presidency is intensely remembered, not merely as a byproduct of his tragic fate. Kennedy steered the nation away from the brink of nuclear war, initiated the first nuclear test ban treaty, created the Peace Corps, and launched America on its mission to the moon and beyond. JFK inspired a nation, particularly the massive generation of baby boomers, injecting hope and revitalizing faith in the American project.

Martin Sandler's The Letters of John F. Kennedy stands out as the only book that draws on letters from and to Kennedy, as collected at the Kennedy Presidential Library and Museum. Drawn from more than two million letters on file at the library--many never before published--this project presents readers with a portrait of both Kennedy the politician and Kennedy the man, as well as the times he lived in.

Letters to and from the likes of Martin Luther King Jr, Clare Booth Luce, Pearl Buck, John Wayne, Albert Schweitzer, Linus Pauling, Willy Brandt, Eleanor Roosevelt, Nikita Khruschev, Harry Truman, Herbert Hoover, a young John Kerry, and Ngo Dinh Diem are complemented by letters from ordinary citizens, schoolchildren, and concerned Americans. Each letter will be accompanied by lively and informative contextualization. Facsimiles of many letters will appear, along with photographs and other visual ephemera from the Kennedy Library and Museum.