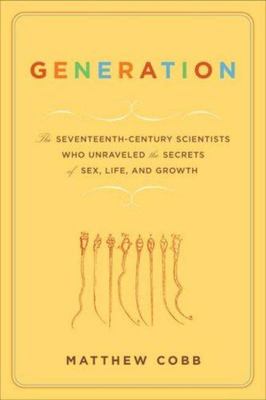 Generation - The Seventeenth-Century Scientists Who Unraveled the Secrets of Sex, Life, and Growth

Generation is the story of the exciting, largely forgotten decade during the seventeenth century when a group of young scientists-Jan Swammerdam, the son of a Protestant apothecary, Nils Stensen (also known as Steno), a Danish anatomist who first discovered the human tear duct, Reinier de Graaf, the attractive and brilliant son of a rich and successful Catholic architect, and Antoni Leeuwenhoek, a self-taught draper-dared to challenge thousands of years of orthodox thinking about where life comes from. By meticulous experimentation, dissection, and observation with the newly invented microscope, they showed that like breeds like, that all animals come from an egg, that there is no such thing as spontaneous generation, and that there are millions of tiny, wriggling "eels" in semen. However, their ultimate inability to fully understand the evidence that was in front of them led to a fatal mistake. As a result, the final leap in describing the process of reproduction-which would ultimately give birth to the science of genetics-took nearly two centuries for humanity to achieve. Including previously untranslated documents, Generation interweaves the personal stories of these scientists against a backdrop of the Dutch "Golden Age." It is a riveting account of the audacious men who swept away old certainties and provided the foundation for much of our current understanding of the living world.