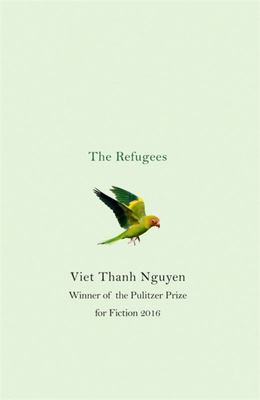 In The Refugees, Viet Thanh Nguyen gives voice to lives led between two worlds, the adopted homeland and the country of birth. From a young Vietnamese refugee who suffers profound culture shock when he comes to live with two gay men in San Francisco, to a woman whose husband is suffering from dementia and starts to confuse her for a former lover, to a girl living in Ho Chi Minh City whose older half-sister comes back from America having seemingly accomplished everything she never will, the stories are a captivating testament to the dreams and hardships of immigration. The second piece of fiction by a major new voice, The Refugees is a beautifully written and sharply observed book about the aspirations of those who leave one country for another, and the relationships and desires for self-fulfillment that define our lives.

Nguyen's eight heart-wrenching and hopeful stories ought to be required reading for every politician in this era of wall-building and xenophobia. The Guardian, Fiction to Look Out for in 2017 With anger but not despair, with reconciliation but not unrealistic hope, and with genuine humour that is not used to diminish anyone, Nguyen has breathed life into many unforgettable characters, and given us a timely book focusing, in the words of Willa Cather, on "the slow working out of fate in people of allied sentiment and allied blood" the Guardian A powerful antidote to all the fearmongering and lies out there ... A rich exploration of human identity, family ties and love and loss, never has a short story collection been timelier. ***** Five stars. the Independent Beautiful and heartrending the New Yorker, Joyce Carol Oates A collection of fluidly modulated yet bracing stories about Vietnamese refugees in the US, powerful tales of rupture and loss that detonate successive shock waves ... Each intimate, supple, and heartrending story is unique in its particulars even as all are works of piercing clarity, poignant emotional nuance, and searing insights into the trauma of war and the long chill of exile, the assault on identity and the resilience of the self, and the fragility and preciousness of memories. Booklist (starred review) For Nguyen groupies desperate for future titles (including a Sympathizer sequel), [The] Refugees is a highly gratifying interlude. For short fiction fans of other extraordinary, between-culture collections such as Daniyal Mueenuddin's In Other Rooms, Other Wonders and Jhumpa Lahiri's Unaccustomed Earth, Nguyen won't disappoint. Library Journal (starred review) Precise without being clinical, archly humorous without being condescending, and full of understanding; many of the stories might have been written by a modern Flaubert, if that master had spent time in San Jose or Ho Chi Minh City ... [Nguyen's] stories, excellent from start to finish, transcend ethnic boundaries to speak to human universals. Kirkus Reviews (starred review) The nine stories that make up this brief volume are a delight ... The short story is a beautiful affirmation of the supreme importance of art in our daily lives. And Viet Thanh Nguyen drives that point home brilliantly. Mekong Review

Viet Thanh Nguyen was born in Vietnam and raised in America. He is the author of The Sympathizer, which was awarded the 2016 Pulitzer Prize for Fiction, the Andrew Carnegie Medal for Fiction, the Center for Fiction First Novel Prize, the Edgar Award for First Novel, the Asian/Pacific American Award for Literature, and the California Book Award for First Fiction. He is also the author of the nonfiction books Nothing Ever Dies and Race and Resistance. He teaches English and American Studies and Ethnicity at the University of Southern California and lives in Los Angeles.